For anyone that has missed my numerous updates and posts via Facebook in recent days; we have a new world record for the deepest open circuit scuba dive.

On Friday 19 September 2014 Ahmed Gabr broke the previous record  of 318.25 metres set by Nunu Gomes in Dahab in 2005.  Ahmed Gabr has brought the record home diving to an amazing 332.35 metres, the dive took 13 hours and 50 minutes and Ahmed breathed 92 tanks of various mixed gasses during this epic achievement.  Starting at 10.30am on Thursday and completing his dive at 12.30am on Friday 19 September.  Ahmed and his support divers were joined in the shallow waters by a baby reef shark who stayed with the divers for six hours during the gruelling decompression schedule.

Ahmed thanked his amazing team of medics and support divers who helped him in realising his dream and becoming the new Guinness world record holder.  Ahmed has also expressed gratitude to all his fans for their continued support and thanked his critics for giving him the determination to succeed.  Ahmed and his support team were greeted at the jetty in the early hours of the morning by fireworks and well wishers who had gathered to welcome the returning hero.  Ahmed surprised everyone by walking unaided immediately after surfacing, despite the gruelling dive he was able to celebrate with his young son who he embraced as soon as stepping foot on dry land.

There are some excellent articles appearing in local and international press and no doubt in coming days we will get to see and hear more from the whole #worldrecord350 team. 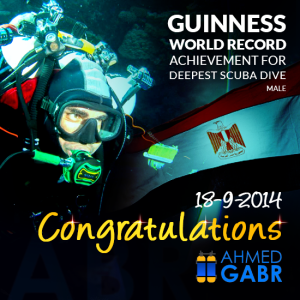 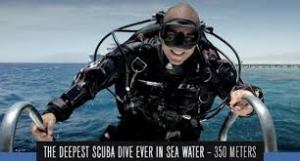 September 18th 2014 is a big day for Dahab and the competitive world of scuba diving. Ahmed Gabr, an Egyptian ex-army officer will attempt to not only break the current Guinness World Record for open circuit scuba diving – he intends to smash it.

Ahmed has been training hard at H2O divers in Dahab and along with an excellent support team of many friends and long term Dahabians, Ahmed intends to safely reach and ascent from a depth of 350 metres. We wish Ahmed and all the guys at Team #worldrecord350 the very best of luck in this amazing record attempt.

Nunu Gomes from South Africa holds the current world record for the deepest dive in the world, this dive of 318.25m was also made in Dahab in June 2005. Dahab and in particular the Blue Hole provides some of the world’s best deep diving conditions, crystal clear warm water with depths easily reached only a few metres from shore. Pascale Bernabéa a French scuba diver claims to have dived to 330m off the coast of Corsica on 5 July 2005. This deep dive would have broken the current record held by Nunu Gomes however it was not verified by the Guinness world record team due to insufficient evidence.

Scuba diving to such depths requires not only strength, determination and courage it requires a precision of scientific planning that must be second to none. On deep dives every metre of depth and every second of time is vital in the planning and execution of the dive. Using different blends of trimix, which is a mixture of oxygen, helium and nitrogen the deep diver is able to breathe the optimum gas mix at each depth. The novice scuba diver will have learned that at around 30m underwater the nitrogen in the air we breathe in a normal tank of compressed air can cause nitrogen narcosis.  Nitrogen narcosis impairs your judgement in the same way that alcohol and other drugs can. Divers suffering from nitrogen narcosis can act foolishly in the water and are  unable to concentrate on simple tasks. Oxygen under pressure also has hugely negative effects on the human body. Oxygen toxicity, if it occurs is fatal; it causes the diver to convulse uncontrollably and drowning will follow. Breathing normal compressed air with 21% oxygen, the risk of oxygen toxicity can occur at 66 metres which is outside of the realms of recreational scuba diving; however as dive instructors it is one of the most important things we teach even our most inexperienced students. So the effect of gases under pressure play the most important role in dive planning, it is why you simply can’t jump in the water and descend to any depth you wish and it is why planning a dive to 350m has taken months and months of meticulous planning and practice dives. Ahmed will be underwater for an estimated 14.5 hours, he and his team will breathe more than 90 cylinders of various gas mixes with the helium alone costing thousands of Euro.

I for one will be waiting anxiously above water on Thursday 18 September waiting for news of Ahmeds safe return from the depths. Sadly this time I will not be in Dahab like I was on 10 June 2005 when Nunu Gomes set the benchmark.

For further information on this amazing endeavour please take a look at the official #worldrecord350 webpage for photos, fundraising and up to date information.